You are here: Home1 / digital teaching 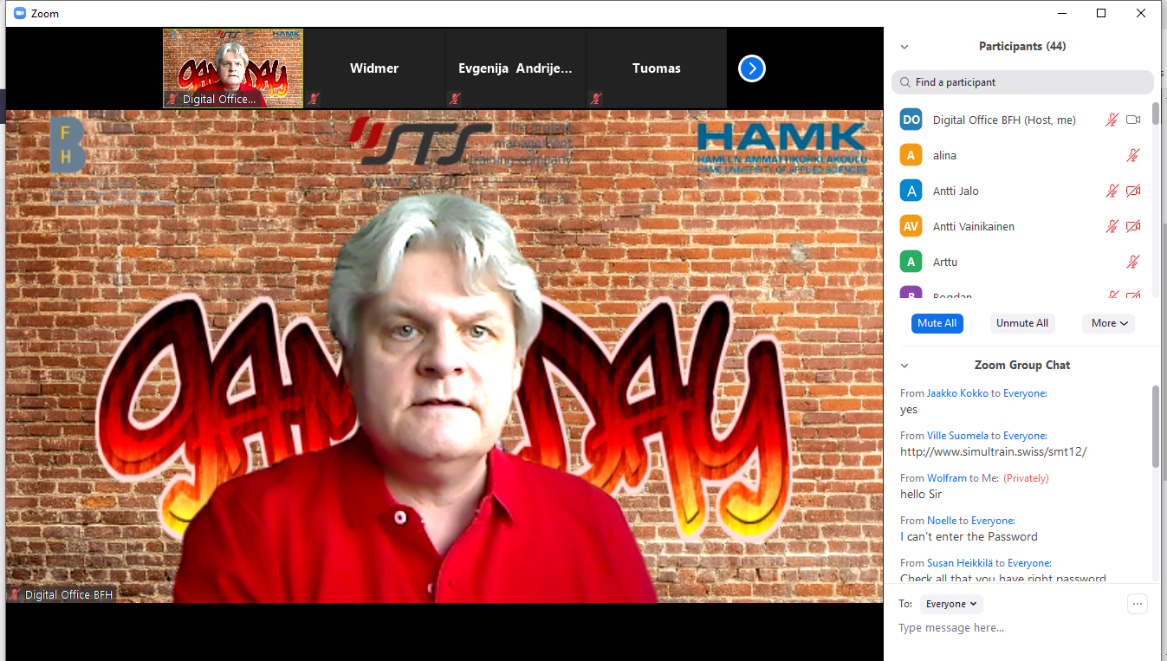 Switching teaching to digital can be quite easy and still provide an excellent learning opportunity for the students: To let our students in the project management course experience what happens when executing projects, we play with them a project management simulation game. While in other years we ran this as an event in our biggest lecture room, this year due to Corona we were forced to hold the event as an online event with all students participating from home. It worked surprisingly well, but some points need to be considered when switching such an event to digital.

One of the highlights every year in the project management course for our bachelor students in business administration is the so-called “Game Day”. This is a one-day event where students play the project management online simulation game SimulTrain in order to give the students an immersive experience what project execution is about. The project execution part is something that cannot be taught – at least not well – in theory, rather practice and experience are needed. In the rest of this introductory course to project management, students learn mainly how to plan projects. On Game Day, students work in groups of 3-5 students, taking on the role of a project manager, putting theory into practice: First they do a detailed planning (i.e., assign the right resources to all the tasks of a given project), and then they execute the project with the clock ticking. In one day, 12 weeks of project execution are simulated. They have to deal with bosses and co-workers complaining, costs rising, task and project completion being delayed, people getting sick and many more issues. Game Day is an intense but also fun experience, and students learn a lot.

Virtual instead of personal

For the last few years we had been organizing two Game Days in the week before Easter: One in German for our students in the regular programme, and one in English for our students in the international programme. All students participating in the event in German were sitting in the main auditorium, each group gathering around a single computer running the game, as only one person per group can be logged in to the game. The groups participating in the event in English were additionally provided with an international experience, as the event was run together with one of our partner universities, the Häme University of Applied Sciences (HAMK) in Hämeenlinna, Finland. In each group, 2-3 students from both Finland and Switzerland needed to cooperate. As with the event in German, all students were sitting in a big auditorium of their respective universities, but in addition each group also connected through Microsoft Teams or Skype with their counterparts in the other country to plan and execute the project collaboratively. The person operating the SimulTrain software needed to share his or her screen with all other participants.

This year, everything was different. Due to the outbreak of the Corona crisis, it became soon clear that we will not be able to hold these events as usual, with more than 60 people crammed into the same room. However, we didn’t want to cancel these events, as they provide our students with a very good learning experience. Therefore we decided to switch to events conducted purely online. One of the challenges we faced when setting this up is that the Game Day agenda (see Figure 1) consists of sessions with different formats: There are plenary sessions comparable to standard webinars with mainly teachers talking, and there are sessions where the groups work on planning and executing their project. 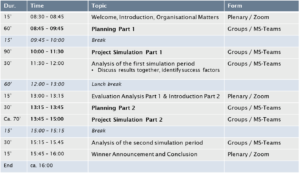 During the group sessions, the teachers need from time to time to make announcements (e.g., alerting that a phase is coming to an end soon), but they als need to choach the individual groups. SimulTrain includes a TrainerDesk that offers teachers good capabilities to see what the students are doing and to identify groups that have difficulties. Teachers can then address these groups specifically. In addition, some student groups may ask for help or pose concrete questions. The easiest way to handle all these requirements was to use two separate communication channels open all the time, using two different tools: 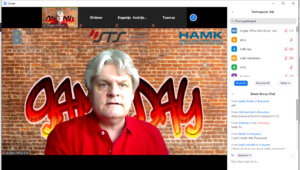 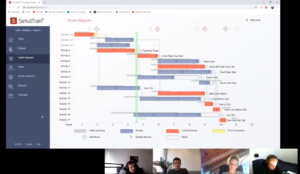 In MS-Teams we created one Team including all students of one event, and then added a separate channel for each group. Each group started a video conference within their channel (Figure 4 shows a screenshot of MS-Teams with over 20 video sessions in parallel). When teachers wanted to coach a group, giving some hints and advice, or just to check how the group felt it was doing, they could then simply join the respective call. Or if students needed something, they could invite a teacher to join their session. In addition, we set up a private channel for all teachers for coordination and discussion among teachers. 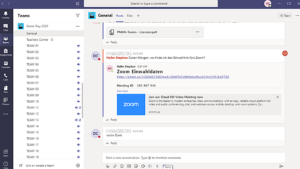 Figure 4: MS-Teams with more than 20 video chats in parallel

As it turned out, this setup worked very well. Switching between the two different communication tools, as well as using the respective chat functions, didn’t cause any problems, neither for the teachers nor the students. But even more importantly, also from a learning perspective this setup proved to be successful. We could observe that students tended to be more evenly engaged compared to previous years. Before, when students were sitting around one computer, often one or two students couldn’t see the screen very well and tended to be distracted. Even worse in the international setup: The part of the group operating the simulation software (usually the Swiss side in the morning, and the Finnish side in the afternoon) was engaged, while the other side tended to just watch what the others were doing, and each side tended to mainly communicate with the peers sitting next to them, neglecting their remote peers. Now this year, everyone was on the same level – sitting home alone and communicating through video chat and screen sharing. Also, the coaching proved very effective because of this. While in previous years we could walk to the groups, we could directly only talk to the people sitting there, not the remote ones. And, as teachers, we were never on the same level as the students: teachers standing, students sitting, which from a psychological perspective also might be somewhat ditremental for coaching. This year, we were able to speak with all group members equally.

From the experience of this year’s Game Day, having organized the event for a few years in the traditional setting, there are a few points I believe are important when organizing such an online teaching event with 60-70 participants:

Next year, hopefully the restrictions because of Corona will have been lifted, and we would be free to choose in which form to organize the Game Days. So, will we switch back to the traditional setting? For the international Game Day, the answer is definitely no. Both the coaching experience and student interactions were way better this year in the online setting. For the German Game Day, the answer is less clear-cut, as having everyone together at the same place also has its advantages, mainly interaction in the plenaries is easier and better. We will evaluate the feedback we get from students before taking any decision, but personally I believe we will continue with the pure online form. While interaction in the plenaries is more difficult, just the experience of working online in groups is an additional value for our students, as this is a skill that they will need at their future places of work.

The Project Management Game Day is kindly supported by STS Sauter Training & Simulation SA, a Swiss company dedicated to providing trainings in project management and developing innovative project management training tools like SimulTrain. My special thanks go the colleagues from the teaching staff that helped to set up and run this event with their respective classes, namely Susan Heikkilä and Lasse Seppänen from HAMK, and Bogdan Lent and Nicolai Wenger from the Bern University of Applied Sciences BFH.