How football clubs can digitise their sponsorship

Thanks to Covid 19 certification, full stadiums are partly allowed again and fans are finally allowed to support their favourite club on site. This means that sponsorship activities such as advertising banners in the stadium, sponsored stadium announcements, etc., for which companies pay a lot of money, can be seen and heard again. Previously, clubs could not offer this visibility to their sponsors for almost a year, or only to a limited extent. The digitalisation of football can be a solution to this and affects not only coaching but also sponsorship. This article presents the social media aspect of football sponsorship.

Anyone who has been to football stadiums as a spectator has certainly noticed that, in addition to the classic perimeter advertising, announcements by the announcer such as the starting line-up, goal scorers, half-time score etc. are also marketed in some stadiums. “The starting line-up is presented by…”. At the same time, parallel to these announcements, “posts” with the same information (e.g. the starting line-up) are often published in the timeline or story on the club’s social media channels, but remarkably few of these are marketed.

Social media channels have established themselves as a communication tool for clubs to acquire and retain fans and followers. This allows clubs to reach exactly the people they want to reach. So, in times of empty stadiums, are social media channels an ideal means to continue to inform fans live and at the same time integrate sponsors into the posts? In his master’s thesis, the author investigated how the existing sponsorship offer in the stadium could be digitalised via social media platforms. Football clubs have been maintaining information offers on Facebook, Instagram and Co. for several years, which they have so far only used indirectly for profit.

In this work, the so-called “social media assets” were first identified: These are assets of an association that can be used in some way in the world of social media. This overview forms the basis for the creation of posts and sponsorship offers. 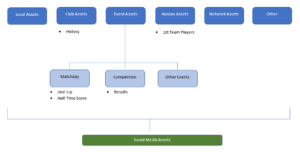 Fig. 1 Representation of the assets 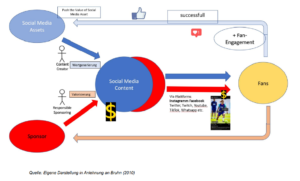 Fig. 2 Draft of a business model

The collection of social media assets and the designed business model, were validated through semi-structured interviews with senior executives at sports clubs, especially football clubs, in the areas of social media and sponsorship, and subsequently adapted. Key findings:

Information about the club, events and players are most interesting

The assets that matter most to sponsors and fans are unsurprisingly in the same three categories for both stakeholder groups: Club Assets, Event Assets and Human Assets. The sponsor is interested in being visible in the content that most interests the fan. Ideally, the Club Assets form a kind of basis that is of interest to fans and sponsors regardless of a club’s success (e.g. history of the club). In addition, fans are very interested in the individual players of the first team (human assets), as well as the games and competitions of the first team (event assets). There are basically two different formats for marketing social media posts. These are the marketing of standardised posts and the marketing of creative content:

Always in the foreground: added value for the fans

Even when social media posts are marketed, the added value for the fans should always be in the foreground. The information and entertainment value must prevail: Sponsors should be subtly integrated into posts and formats. It helps if the club knows its sponsors well and asks itself the following questions during the planning and creation of the offers: Are there sponsors where it is easier to develop creative formats? Are there already sponsors in the portfolio where this task is more difficult? So the idea could be that standardised posts such as line-up, goal scorer, final result etc. could be offered to sponsors where the creative format is easier. Sponsors where the development of more creative formats is difficult (e.g. a trust office).

In addition, recommendations were developed for club practice, differentiated according to the positioning of the club. The next step in the research would be a more detailed examination of the different social media platforms in terms of their suitability for establishing fan contacts and for sponsorship offers.

Thanks to the interview partners: 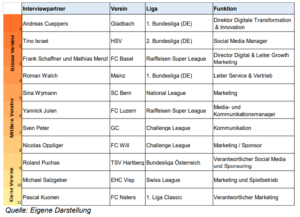 Nicolas Varonier is an employee at the assessment authority of the cantonal tax administration in Valais. Football is his passion, which has accompanied him all his life. As a user of social media platforms and a follower of national and international football clubs, he recognised the potential of digital sponsorship via social media platforms during his literature review.